Hotel Porto Mare in Funchal is worth a visit

Hotel Porto Mare in Funchal was relaxing and peaceful. Even with children in tow.

We've been back from our holiday in Funchal, Madeira for almost a week and boy do I have the holiday blues. In fact, we all do. Jack's back at school and after his first day he asked when our next holiday is. Pete's back into work and already dreaming about his next holiday. And Erin won't let me leave her side at bedtime. I'm sure she wishes she was back in our hotel room on holiday!

Our trip was a last minute decision. We had browsed a few hotels in Portugal for some time, but were toying between abroad and UK. I fancied Cornwall. I love it there. However, Pete was craving some 'guaranteed' sunshine. When we finally decided on a hotel in Portugal it was fully booked. No rooms left in the inn, shall we say. So our search started again and led us to a TUI holiday at Hotel Porto Mare Hotel in Funchal, Madeira. 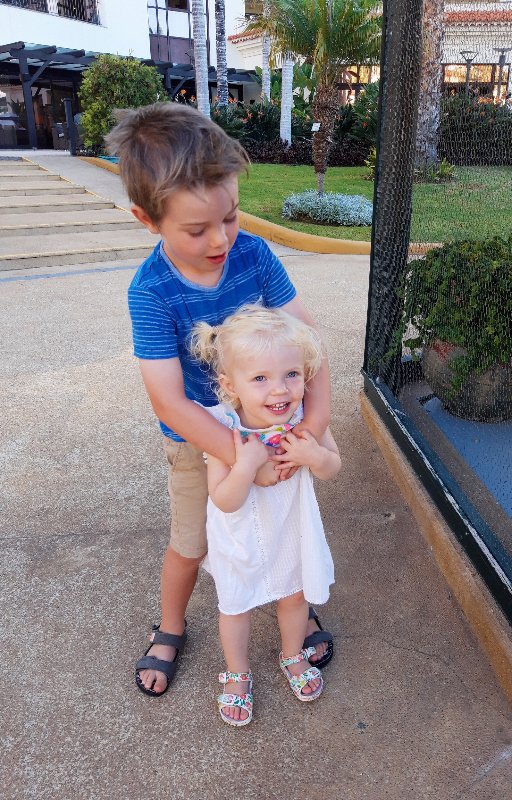 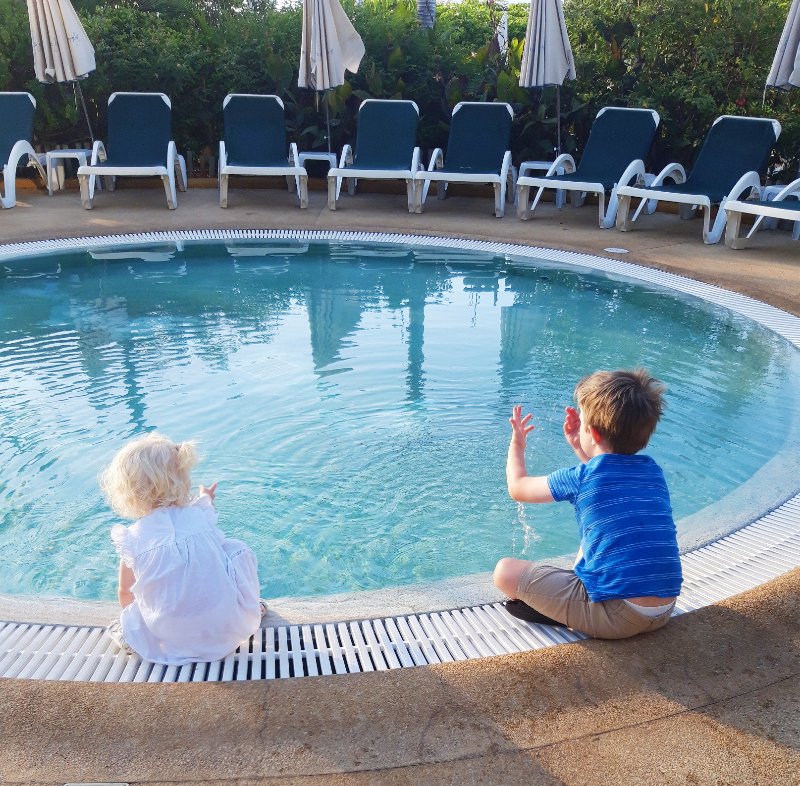 We flew from Luton Airport. We normally go from Gatwick. Luton was just as easy to get to from Newbury, so that was a bonus. In recent years we've booked a Meet and Greet parking service to help with the extra luggage travelling with children brings. This time we booked Drivefly, which is a 'Meet and Greet' service for Luton airport. I wouldn't normally go into detail about the parking - it's pretty boring to read about. However, we were very disappointed so I thought I should let you know to make sure you avoid it.

Drivefly sells itself as a meet and greet, but it's not. It's a 'park your car in the car park and hand your keys over' service. We paid a premium for meet and greet when we should have just parked our car and paid the airport car park prices instead. Let's just saying lugging 4 suitcases, 4 hand-luggage bags, a buggy and a car seat down a lift and half a mile to the airport entrance at 4am was not fun!

The flight was actually pretty good. Better than I thought it would be with two young children on a 3 hour and 30 minute flight. We've flown with Thomson a lot in the past. However, I think our experience this time was the best we've had. The flight attendants were extremely friendly and couldn't do enough to help. The Pilots also gave regular updates throughout the flight. I really don't like flying, so this was brilliant for putting me at ease.

Flight over, we were met by a private-taxi transfer who even had a car seat. Note to self for next time - don't lug our own car seat around Europe!

The car journey was over within 30 minutes and we had made it. Our holiday had begun. 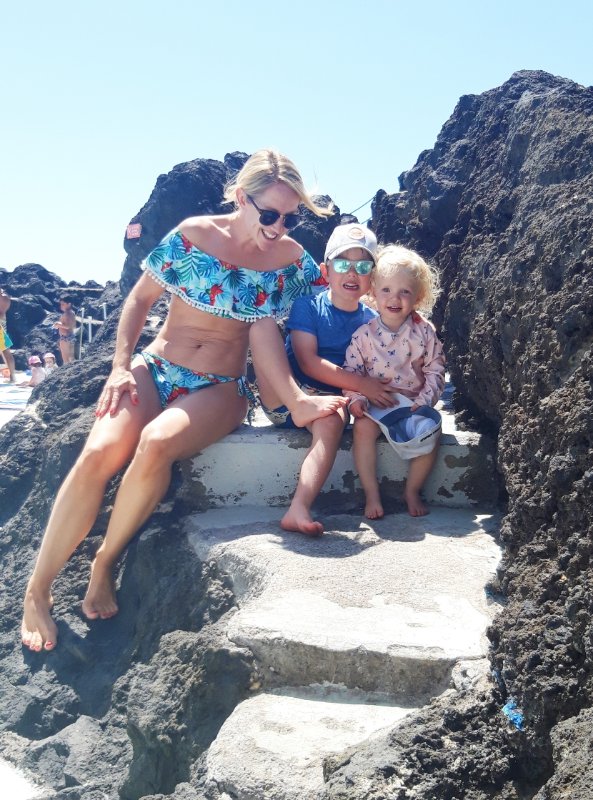 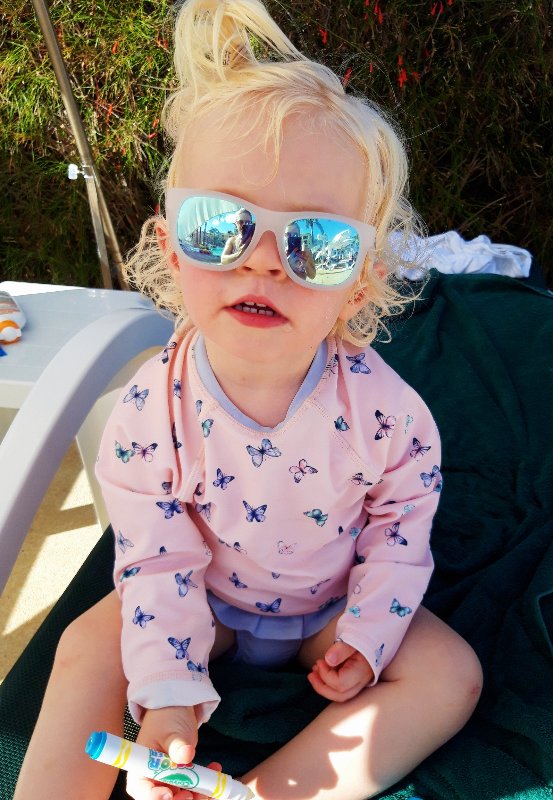 We arrived at Hotel Porto Mare which was situated just outside Funchal, the capital city of Madeira. Our first impressions were good. It's decorated in a very traditional Portuguese-style. A bit more dated than we're used to, but very clean and the staff were very welcoming.

We were extremely lucky to be given one of the hotel's suites. This is a big upgrade for us - we felt like royalty. It was the perfect room for a family of four.

Walking into our suite we couldn't believe our luck. We were met with:

To conclude on the room, it was bliss. The views were stunning too.

We opted for Bed and Breakfast over Half Board. Erin wouldn't make dinner at 6.30pm as she'd be too tired, so it seemed the best option for us. Thomson's description said Hotel Porto Mare was close to restaurants, so we thought we'd be able to find somewhere nearby to eat lunch and dinner.

Unfortunately, we only discovered one restaurant near us that's worth mentioning - Qasbah Lounge Cafe. Pete and I had the best meal of our holiday there. I had grilled salmon and risotto. Pete had sardines with Portuguese-style potatoes. Very tasty! And the views looking over the sea were breath-taking.

Other restaurants we found only offered the 'usual' pizza, burgers, pasta and the ruggies favourite...ham and cheese toasties! The ruggies were obviously fine with this. Pete and I just got a bit bored and craved a decent meal.

That said, the breakfast at Hotel Porto Mare offered everything you could want. It wasn't anything out of the ordinary, but you definitely wouldn't go hungry. I enjoyed the omelette's which were made fresh and the fruit. The oranges were the scrummiest I've ever tasted!

Hotel Porto Mare is one of the quietest hotels I've been to for a long time. That's probably because we have young children so tend to choose hotels more geared up for families. The hotel welcomed families, however most of the people staying seemed to be in couples. Probably why it was so quiet!

There were times when I had to ask the ruggies to lower the noise levels. Not ideal I suppose when you're trying to have a nice holiday. However, because it wasn't so hectic it did make us all relax a lot more. The whole atmosphere was so peaceful and tranquil. I never thought I'd say that with two young children! 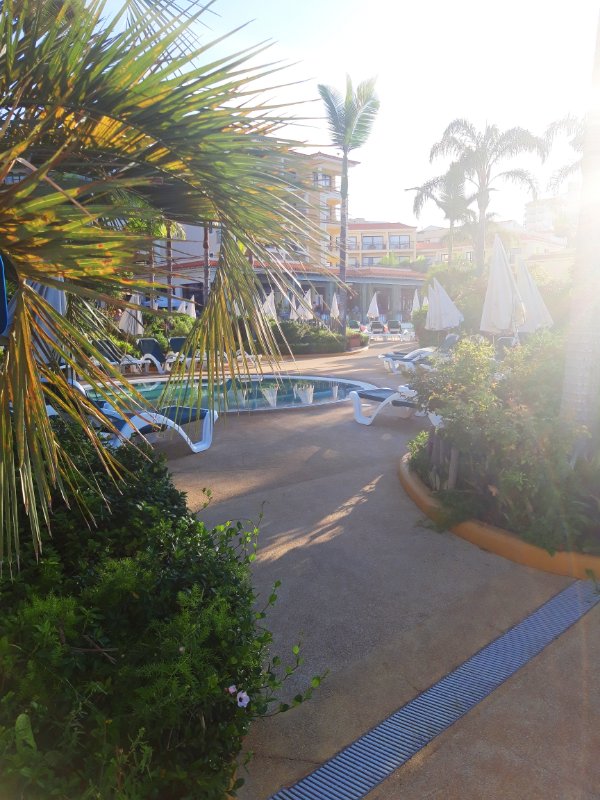 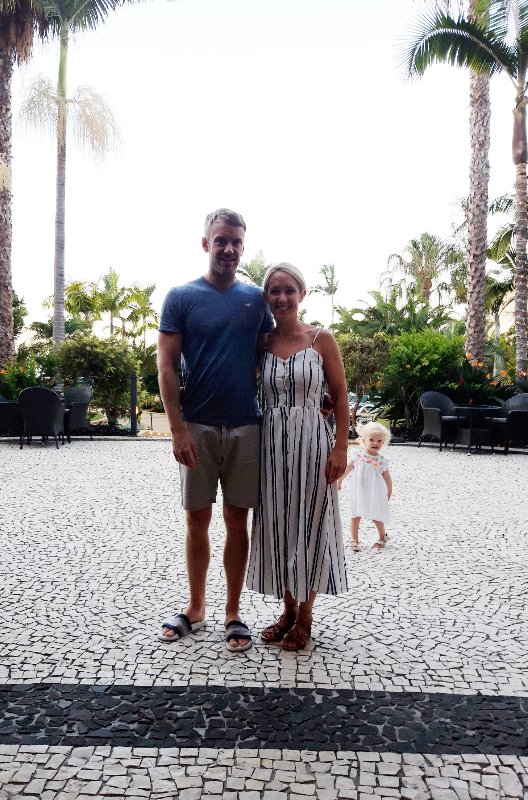 Things to do: mini-golf, chess & the Lido.

Despite the food not living up to much, there was plenty to do.

The hotel had lots of entertainment and activities on site.

Some of the things we managed to get around to doing were:

Jack (ruggie 1) is a huge fan of golf. I think we must have played six rounds of mini-golf while we were there. Erin (ruggie 2) loves animals. They had a bird cage near the pool with some very cute budgies. This was a highlight for Erin every morning!

In Funchal, there were some interesting things for families to explore, such as:

The Wine Festival was also in full swing during our stay. Lots of dancing, drinking and eating in the streets!

We headed down to the Lido on the Saturday. It was full of local families having fun and the buzz was great. There were three slides for the ruggies which they loved. The views out to sea were simply beautiful. We ate octopus sandwiches for lunch (a local dish) and ice creams for pudding. It's fair to say, this was our best day of the entire trip. 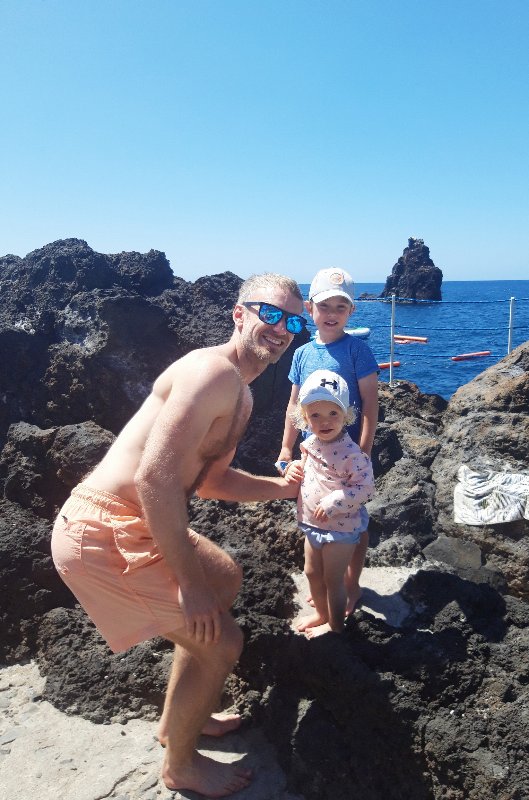 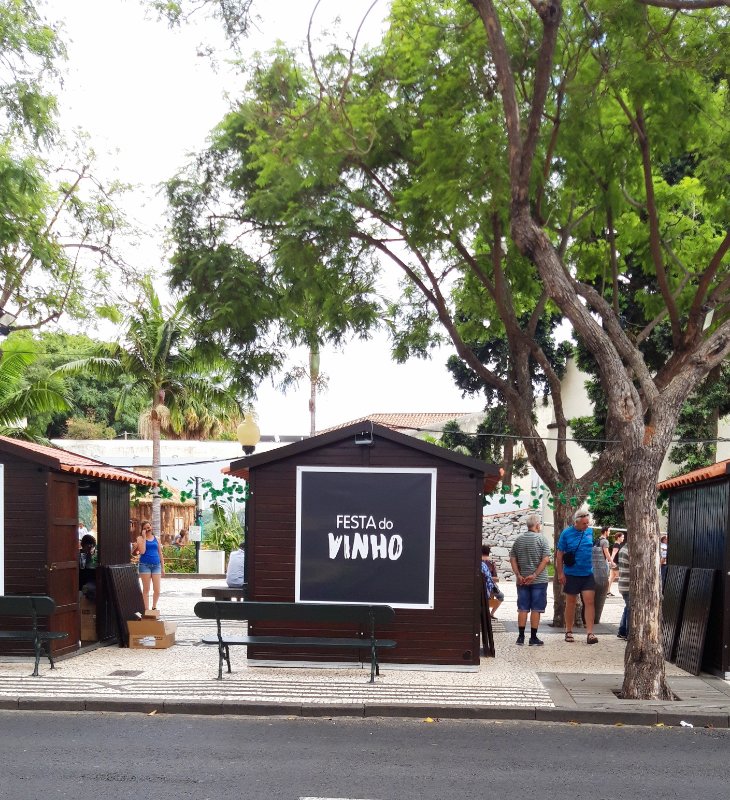 Yes, we'd certainly recommend for families to stay at Hotel Porto Mare. The reviews we'd read online before our trip were spot on. The hotel ticked a lot of boxes for us as a family. It was clean, the rooms were spacious, there were lots of activities for the ruggies, the pools were warm enough to swim in, the breakfast was tasty and the staff were extremely helpful.

I only have two negatives about the hotel:

1. People put towels on the sunbeds very early in the morning and then head off to breakfast. This really bugs me about some hotels. We refuse to get involved in it. It meant we didn't always get the best spot, but there were plenty of sunbeds to choose from.

2. There was maintenance going on at the hotel during the day. On three of the days, branches were being chopped off the palm trees. Ok, I get this needs to happen to maintain the area, but I don't understand why it couldn't happen before 9am or after 5pm when the pool was closed. We tried to eat lunch in the Alfama restaurant three times during our stay. Twice we couldn't because of the palm tree maintenance, and the third time is was shut. Quite frustrating.

Apart from that, we couldn't fault another thing.

Finally here are our highlights:

Erin's highlight: The budgies and the playhouses by Alfama restaurant

Pete's highlight: Sardines at Qasbah Lounge Cafe and the views

My highlight: Our suite and the sights of Funchal (the Mateus rose was pretty tasty too)

Drop me an email if you'd like to know more about the hotel hello@mummyandtheruggies.co.uk 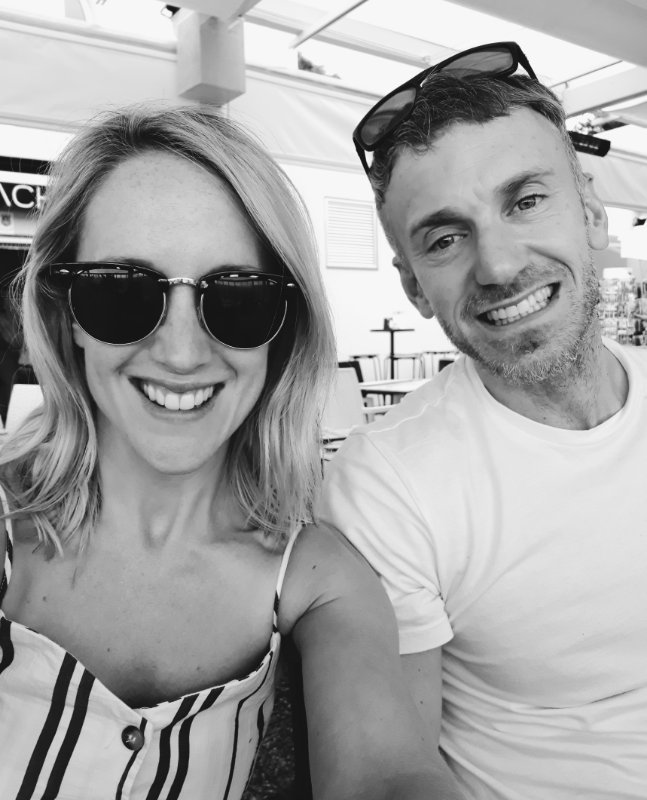 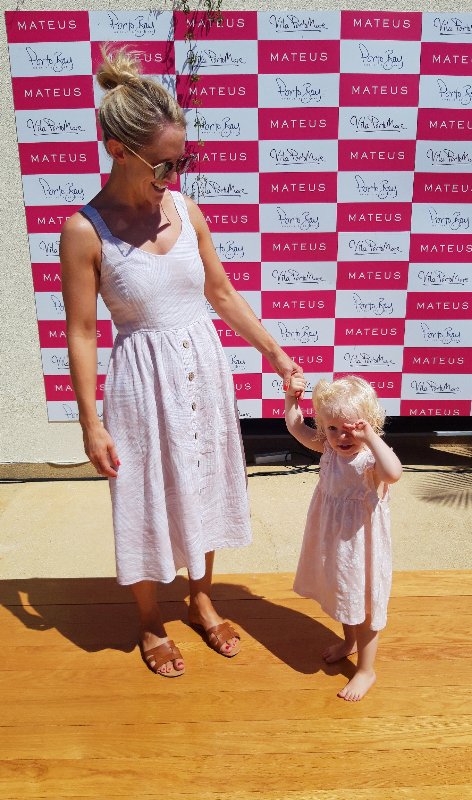 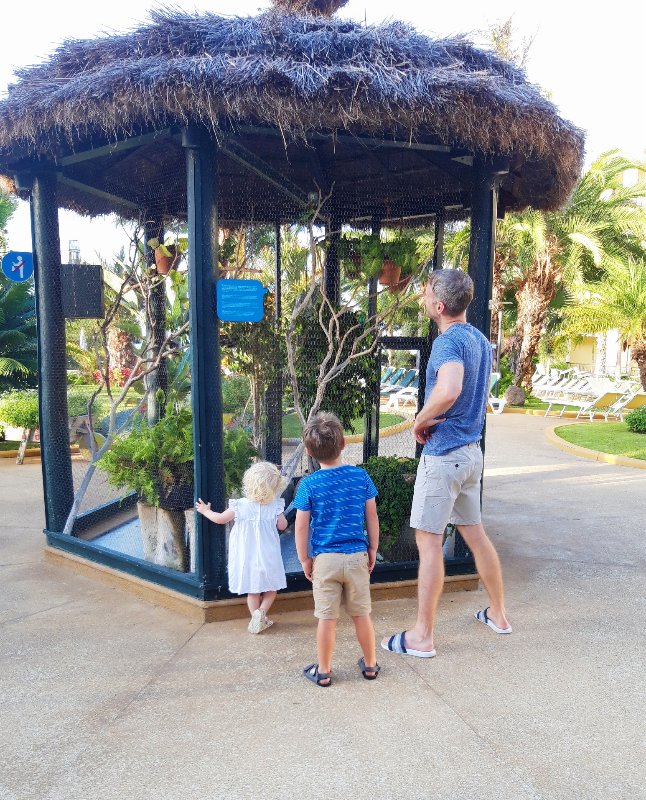 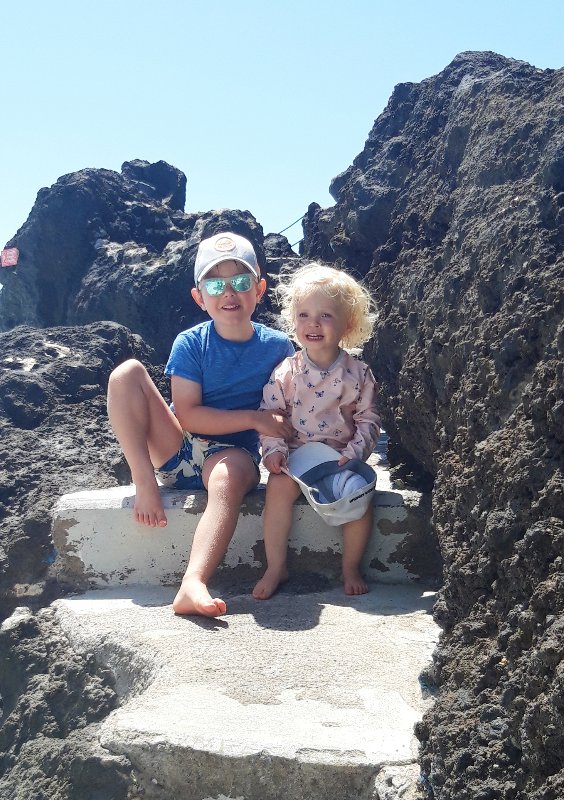 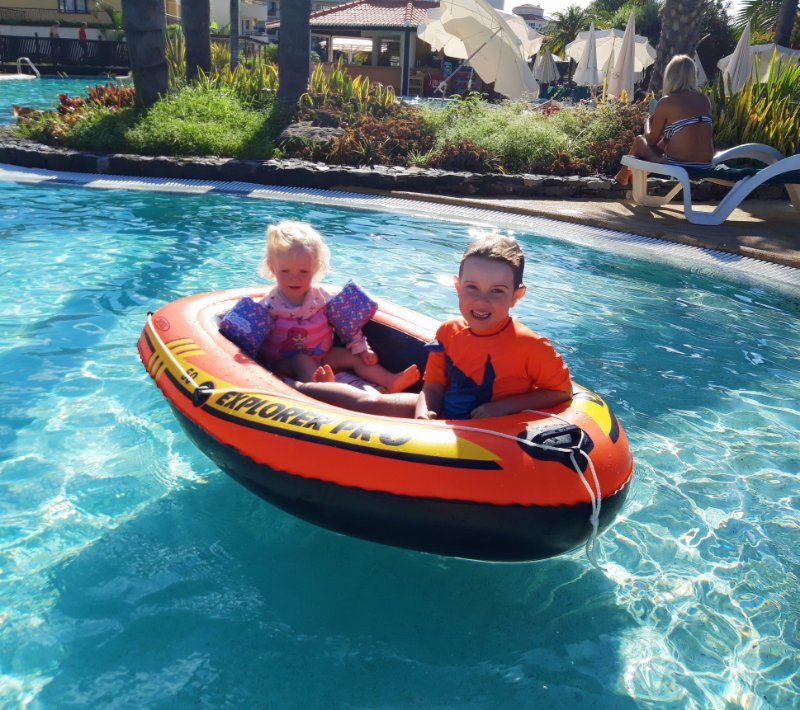 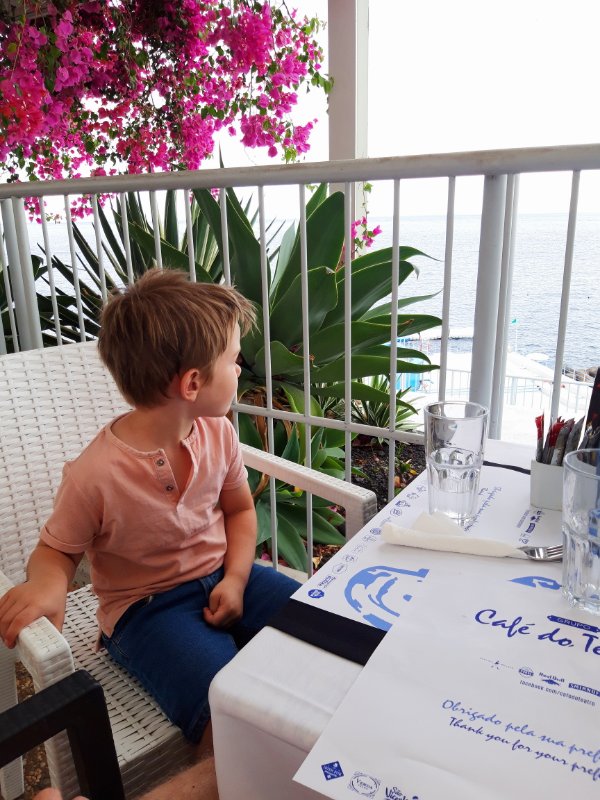 Wildlife Photographer of the Year exhibition at The Base in Newbury